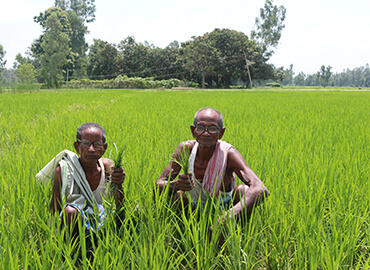 COVID-19 continues to intensify its attack on every sector. This pandemic has triggered a discussion worldwide about agriculture and food security, which closely relates to land use and management. This brings back the discussion on what kind of land reform we should look for to achieve agriculture development and food security in Nepal after the pandemic. This brief article aims to explore the possibilities and rationale of people-centred land reform in the face of the crisis.

Land reform has remained a flagship agenda of the Nepali Government for 70 years now, but despite so the land reform in its real sense has never been fulfilled. A huge number of people who lost their job because of the pandemic, either domestically or abroad, will most likely enter the rural agriculture sector, which is still largely underdeveloped and complicated by feudalistic land relations. This will create chaos and disorder in the existing land governance and management system., Unemployment, disruption in food supply chain and system collapse has made it difficult to maintain the usual control and access for small-holder farmers, agricultural workers, indigenous peoples, Dalit and pastoralist communities.

In order to protect land rights and promote tenure security of land-poor peasants, family farmers, informal settlers, indigenous peoples, and rural men and women, the Government of Nepal should implement people-centered provisions – few are already included in the Constitution, policies, and laws related to land and agrarian reform. Land governance in Nepal requires improvement as it has scored only 49 out of 100 points as per LANDex pilot study for 2019. Equitable land distribution remains a distant dream for Nepal since around 53% of families who own less than 0.5 hectares of land occupy only 18 percent of total agricultural land. Only 4 percent of the families out of 3,831,093 agricultural households control 22 percent of the agricultural land according to the 2012 Agriculture Census.

CRISIS AS OPPORTUNITY AMIDST UNCERTAINTIES

COVID-19 is gradually unfolding in different places and in Nepal, strict lockdown measures has been enforced for one and half months now. Many are not sure if things are going to return to normal. In this context, we need to keep trying to change the situation that we don’t want to live in. The agricultural sector is seen as one of the back-bone to shoulder the sudden income and employment loss. Experts and political leaders are providing mesmeric speeches on the fallow land across the country without reliable evidence and actual data. This is a blind faith that the unequal and underdeveloped agriculture sector would weigh this historic responsibility and protect the country from collapse. Therefore, we need to change the unequal land relations to make the agriculture sector more equitable and resilient through people-centred measures now.

The facts are unpleasant enough. In Nepal, 59.9% of people currently live in urban areas. Before the pandemic, there is a situation in which one in every five people is employed in agriculture (20%) (where 8 out of 10 is informally employed), 17.5 per cent in industry, 13.8 per cent in construction and 62.2% are employed in the informal sector. It is estimated that once we return to normalcy, the agriculture sector will receive an unprecedented number of workers coming from the informal sector and overseas employment. Considering this outlook, we need to weigh our policies and programs targeted to land and agrarian reform.

The government seems to be in a great dilemma as the predictions are not sound enough given the huge data gap. The business-as-usual modality will not fit in the land and agrarian reform initiative in the new normal as the pandemic has already started to knock down the established economic system.

In this situation, the government must explore the nitty-gritty of the land resource and its potential. The Government should try to obtain data on, among others, how much land has remained fallow in the past few years and how many workers could be absorbed should the land were to be utilised properly. At present, the contribution of agriculture to Nepal’s Gross Domestic Product (GDP) is 27%, but the Government should also explore expanding the agriculture sector and the added value it would bring to the country’s GDP. Local governments can start working on gathering these pieces of evidence before initiating any ad-hoc steps in the name of enhancing production and utilising fallow land.

In general, the problem lies not in the availability of land, but in the strategic planning and effective implementation of plans and policies. The existing policy orientation is to reduce the reliance on agriculture sector but the pandemic has turned it upside. That has once again shed light upon the neglected land and agrarian reform.

Landlessness in Nepal is caused not by the limited availability of land but because of the lack of equitable land distribution system. According to the High-Level Scientific Land Reform Commission, in 2010 there were 1,407,100 landless families and 421,770 Hectare land is estimated to be required for them. Meanwhile, the Government could have acquired 4,996,465 Hectare land and distributed 492,851 Hectare out of it for housing and agricultural purpose.

The situation has drastically changed in the past decade, but still, there are an estimated 1.6 million people remain landless amidst this abundance of land and more than 250 thousand people are still working as tenants. Around the 25% of arable land being used is yet to be brought under the land administration system.

There is no specific plan for land restoration. Land is being degraded rapidly in the mid-hills and Tarai region. The management and governance responsibility and authorities related to land resources are distributed among different Ministries of the government.

Civil society organisations (CSOs) working on land and natural resources have raised the issues of several incongruities among the sectoral policies, which often contradict and reduce the effective implementation jeopardising the systemic change in the ground.

For example, the Government has formed a Land Related Problem Solving Commission (LRPSC), which has the authority to settle hitherto land-related problems including land distribution to the landless. The Ministry of Forest and Environment is openly challenging the commission that it will not allow forestland to be distributed for landless and informal settler’s rehabilitation purpose. This sort of activities may jeopardise the overall aim of nation-building and erode the resilience of the state. Therefore, CSOs like the Land Governance Working Group (LGWG) can play a catalytic role in facilitating the integration of all the conflicting policy provisions and build common consensus about national priorities like land and agrarian reform at the first place.

Coordinated effort and support from CSOs have become urgent for two important tasks to do immediately. Firstly, conduct comprehensive context mapping of land and natural resources in order to collect data on land, agriculture and population and take into account the effect of the COVID-19 pandemic. Secondly, the integration of land-related policies and laws as a first step towards achieving people-centred land governance.

It is a challenging task to maintain land reform a priority of the government, especially in challenging times like. the pandemic that we’re facing. However, the recently formed Commission can be the perfect suit to perform basic functions in coordination with the land community as it has the authority to solve land governance-related problems.

Benefits from land and natural resources are not uniformly distributed across groups and there are systemic differences between command over resources that the poor and rich enjoy. Equity and social justice may be possible through redistributive land reform in countries like Nepal, which relies heavily on the agricultural sector for employment and livelihood. Many people discuss it as it is not a priority at present, but post COVID-19 scenario might be the perfect time to embark into redistribution of land resources, which is seemingly difficult but not impossible if the ruling party dares to do so.

During massive lockdown due to the pandemic, policymakers, decision-makers and CSOs can prepare and discuss all the possibilities for people-centred land reform program. The following are some recommendations to develop Nepal’s land reform program: